In the summer of 2018, New Market righthander Trevin Eubanks got to experience something that most pitchers don’t- he struck out the last batter for a championship team.

This meant he was the victim of the dogpile, but I can’t imagine that it wasn’t worth it. But lest we forget, the big, physical senior also was lights-out all summer. In fact, when the second game of the finals was beginning (the same game that Trevin ended with a K), a general manager of another VBL team said to me, “Charlottesville better get ahead in this game, because if they don’t, and the Rebels get to Eubanks in the pen… it’s over.” Well, he was exactly right.

Among pitchers on this list, Trevin finished 8th in ERA, 1st in batting average against (.100!), 3rd in WHIP, and 2nd in K/9. He was named 1st Team All-Valley, and Baseball America named him the 6th best prospect in the league.

This is the summer performance that might just springboard Trevin into pro ball. He said of his experience in New Market, “I say that summer ball is what you make it. If you truly want to get better you can get better… of course winning the league was fun too but I think it helped me a lot as a pitcher, and I’d recommend the Valley League to anyone.”

Trevin sent 2016 and 2017 at St. John’s River State College, before transferring to Southern Mississippi in 2018.

Trevin has since moved on, transferring to Valdosta State for his senior year. Watch him dominate the Division-II Gulf South Conference in 2019!

Congratulations on that final strikeout, and an amazing summer, Trevin! 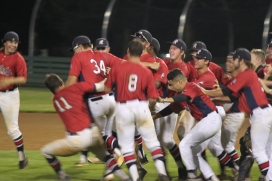 Eubanks (#34) getting tackled after that last out