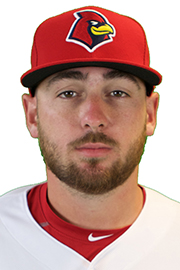 This is incredible! Yet another former Valley Leaguer has made his major league debut in 2018- this time it’s Austin Gomber (Luray 2012)!

Gomber, the 4th player to debut already, has been throwing very well in Triple-A. Back on April 23rd, he threw 8 shutout innings with 0 walks and 16 strikeouts, and the Cardinals needed some relief help, so he was called up. BUT, he didn’t appear in a game.

He returned to Memphis and threw another 8 inning masterpiece on May 21st, and then threw another 6 shutout innings on May 27th, and was called up again.

This time, he made his major league debut last night, June 2nd, when he threw three shutout, no-hit innings in relirf against the Pittsburgh Pirates.

To have four debuts by June 2nd is pretty special, too. Gomber joins Eric Stout (Waynesboro 2012), Justin Anderson (Front Royal 2013), and Ryan Yarbrough (Luray 2012)- his teammate in Luray. Let’s take a look at when the 4th debut happened in the last number of years:

Now, time will tell if this pace will continue. It’s possible that the VBL won’t add any more debuts, but let’s hope that we’re not done…