The Tom Sox moved their game with Covington up to 5 p.m. to make sure they got it in before the storms rolled through again.. and they succeeded. The air was a little thick in Woodstock, with lightning flickering on the horizon in the late innings, but that game survived as well.

The Tom Sox punched their ticket to the South finals with a 10-5 victory over the Lumberjacks in game three of their series.

Finally playing this game after two days of vicious storms rocked C-Ville Weekly, the Sox had four hits for extra bases- a double and home run from James Ingram in particular- to batter the Jacks.

Ethan Sund got the win from throwing five solid innings, and Maddison Furman added his own three solid innings for Charlottesville.

The Jacks got three hits each from Domenic Boselli and Jeff Taylor, and Cauy Williams was saddled with the loss after giving up five runs in 3 1/3 innings pitched.

The Jacks go home, while Charlottesville hosts Staunton in game one of the South finals tonight at 7 p.m.

But one night after Woodstock hung 18 runs on the board, Strasburg fought gamely, never giving in, even when the Bandits had the tying run on third with none out in the ninth.

Let’s back up. First, the Express started things off in the top of the third inning when Austin Garofalo launched a Brandon Haggerty offering just to the left of the left field bleachers, putting Strasburg up, 1-0.

The Bandits put together a rally to score three in the bottom of the fourth. Against righty

Jordan Patterson, Aidan Nagle led off with a double ripped just inside the right field line, and was followed by a Lael Lockhart walk and Austin Bates hit-by-pitch to lead the bases. Caleb Ward then forced in a run with a walk of his own, and Josh Jones followed with a hard ground ball at third baseman Zach Scott, who deflected the ball (with his shin) to shortstop Garofalo, who forced Ward at second (allegedly). Lockhart scored on the play. Bates came home with the third run when Andrew Puglielli hit a sacrifice fly to center.

The Express tied the game in sixth against Bandits reliever Sam Ewald. Brett Hawkins led off with a screaming line drive that hopped over Willy Escala’s glove at second and ended up in right field. Griffin Cheney followed with a walk, and both men were bunted over by Josiah Ortiz. Bryson Horne brought in the first run with a ground out to second, and Sonny Dicharia brought in the tying run with a single to left field.

The Express used the same spot up against the left-center field fence in the ninth to go ahead, 4-3. Tyler Johnson hit the spot first, leading off with a double off Bandits reliever Conor Miller. After a Zach Scott bunt, Garofalo hit almost the exact same spot in left center for his own double, driving in Johnson.

Evan Rathburn, pitching with his parents (all the way from Kansas City) in the stands, was given the responsibility to hold the lead. After an uneventful eighth, the ninth started rather ominously for the Express when the Bandits’ Puglielli sliced a double into the right-center field gap, and ended up on third after the ball was mishandled by the center fielder.

In the major leagues in 2018, runners on third, with less than two outs, scored 51% of the time, so Rathburn was definitely in a pickle.

The next batter, Isaac Quinones, hit a hard ground ball right at first baseman Johnson, who stepped on first and then fired across the diamond to try to get Puglielli, who had initially broken for home. Puglielli stopped, slipping on the grass in the baseline, but still scampered back to third. Everyone in the park exhaled.

Next, Jaylon Deshazier worked the count full, and then took ball four to put runners on the corners with one out.

I had just turned to Mr. Rathburn and said, “It’ll be hard to double this guy up,” meaning the new batter, Escala, when Escala chopped a Rathburn offering ball right up the middle. Garofalo, in the middle of everything in this game, ranged far to his left, scooped the grounder, stepped on second and fired to first, just nipping Escala for the double play… and then received a bear hug from Rathburn.

The 4-3 victory keeps the Express alive and forces a one-game-winner-take-all showdown with the Bandits in Strasburg tonight, first pitch 7 p.m. The Express are trying to make their fourth finals in the last five years, while the Bandits are attempting to advance to the finals for the first time in team history. 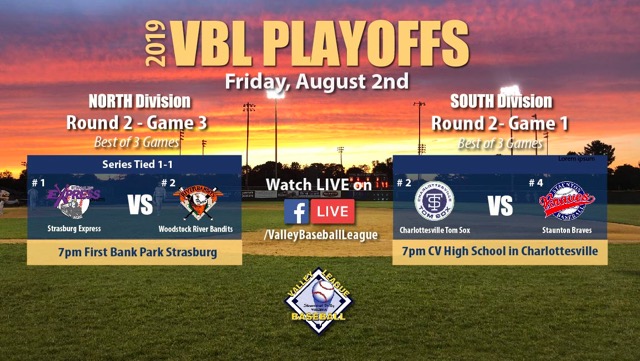