Last night, the Charlottesville Tom Sox made quick work of the Staunton Braves, 10-2, in the deciding third game of the South Division finals. 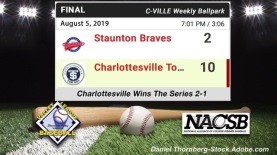 after four. In fact, the Sox led 2-0 after only two batters, when Paul Giacomazzi walked, and Thomas Francisco continued his torrid hitting with a home run in the first inning.

The Sox added two more in the second off starter Jaily Paredes when, with one out, three straight Tom Sox singled. Giacomazzi walked to force in one run, and Francisco grounded out to second base, bringing in the second. The game was all but over after the fourth, when Giacomazzi singled in Parker Nolan, Christian Hlinka singled in Giacomazzi, and Francisco, who is in the middle of everything for the Sox, came around to score on an error.

The Tom Sox now face the Strasburg Express in a battle of the “haves,” as the Express have advanced to the finals four of the last five years, while the Tom Sox are appearing in their third straight finals.

Game one will be played in Strasburg this evening, with the first pitch scheduled for 7 p.m.

Remember that if you can’t attend the game, you can watch live on Facebook thanks to Subway and Sheetz!