Before we start with the 2019 winner, let’s take a look at past top starters:

Woodstock’s Tristen Bayless took the mound in Cary, North Carolina, ready to face the best the Florida Collegiate League has to offer. In front of a dozen scouts on a steamy hot morning, the 6-foot-1 lefthander proceeded to blast through two innings, striking out all six batters he faced.

It was a dominant performance by the most dominant pitcher in the 2019 Valley League season.

The rising senior from Houston put up the following numbers:

Of pitchers on the starters list, Bayless finish second in ERA, ninth in innings pitched, second in batting average against, seventh in WHIP, and second in K/9. He was Pitcher of the Day three times:

He was also very good on June 10 at Strasburg (a tough place to pitch). In that one, he finished five innings while allowing one hit, one earned run, four walks, and striking out seven. Showing the fickleness of pitching decisions, he received a loss for that one.

Bayless was an All-Star, a Prospect Showcase participant (see above), 1st Team All-Valley, and Pitcher of the Year, as chosen by team representatives and media members. Wow!

Bayless has been a bit of a nomad in his college career. He spent 2017 at Texas A&M, where he obviously only saw action in two games. He moved to McLennan Community College in 2018, and showed strikeout potential. He transferred to Houston for 209, and spent that season working as a lefty specialist (a “loogy,” shorthand for “left-handed-one-out-guy”).

Congratulations on your excellent summer, Tristen! 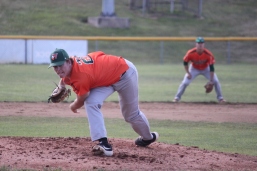 The look on her face is priceless.
The 6th best hitter in the 2021 VBL season- Staunton's Ryan McCarty!