We had three of the four series end after only two games, as Woodstock, Strasburg, and Staunton finished things off, while Covington forced a third game with Charlottesville.

The Woodstock River Bandits scratched and clawed their way to a series sweep against the New Market Rebels.

But for the first five innings, this one was the rarest of Valley League sights- a pitcher’s duel.

zeroes until the bottom of the sixth, when the Rebels finally broke through against Bayless. Alvaro Valdez led off the inning with a bloop single down the left field line, and then was bunted to second by Jonah Seagears. Josh Cox next sliced a line drive towards left field, but Woodstock shortstop Josh Jones made a diving stop to keep Valdez at second, but Cox was safe at first.

Nicolas Nolan finally snapped the scoreless tie when he ripped a double into the left field corner, scoring both runners. Nolan then took matters into his own hands- stealing third on the next pitch, and coming home on a wild pitch.

The Bandits broke through with a run of their own in the seventh, when, with one out, Josh Jones walked, and Andrew Puglielli doubled almost to the 381 sign in left center, chasing O’Brien. Sean Miller got Blake Way to hit a sacrifice fly to right, and then Jaylon Deshazier to ground out to short on a bang-bang play at first.

The Bandits kept battling though, and in the top of the eighth, with one out, Aidan Nagle worked a walk off Miller. Lael Lockhart was hit on the foot with a pitch, and Austin Bates slapped a single to left, scoring Nagle. The Bandits tied the game a batter later when Jones singled to left center, scoring Lockhart.

The Rebels fought back in the bottom of the inning, when Bryce Hulett chopped a single between the first and second basemen, scoring Josh Cox to go up, 4-3.

There was drama in the bottom of the ninth, when Way singled to lead off the inning, and when a subsequent pitch got away from the catcher, got caught between first and second… only to dive back into first safely. The look of relief on his face was priceless.

Jaylon Deshazier then chopped a pitch off the plate, and after an initial stumble, flew down the line and dove safely into first. Jordan Flanders got a fielder’s choice for out number one (a Willy Escala grounder), and struck out Nagle for out number two, but then walked Lockhart to set up the highest drama of the evening- on a full count, Austin Bates ripped a single up the middle, scoring Deshazier and Escala to stun the Rebels, 5-4.

Conor Miller closed the door in the bottom of the ninth, allowing a two-out single, but getting Seagears to pop out to end the game. Brandon Haggerty got the win with his two outs in the eighth inning, and Flanders received the loss.

The River Bandits move on to face the Strasburg Express in game one of the next round tonight in Strasburg at 7 p.m.

The first-seeded Express held serve against the Royals, winning the game and the series against the fourth-seeded Royals.

Led by Zach Scott’s four hits, including two doubles and a home run, the Express used a 12-hit attack to slowly inch away and end the series. The teams were tied at seven after six innings, but Scott led off the seventh with a solo home run, and the squad added two more in the eighth on two run scoring doubles- one by Tyler Johnson, and one by Sonny Dicharia.

Edward Urena was the winner with an inning of relief in he sixth, and Bryson Horne showed off his utility status with three innings of relief to finish things off, earning a save. Ruben Ramirez received the loss for the Royals.

So while the Express move on to face Woodstock in the semi-finals, the Royals head home after a long summer.

The Staunton Braves, winless against the Waynesboro Generals in the regular season, finished a shocking sweep of the Gens with a 9-2 victory in Staunton.

Tied at one after two innings, the Braves exploded for seven runs in the third on five hits 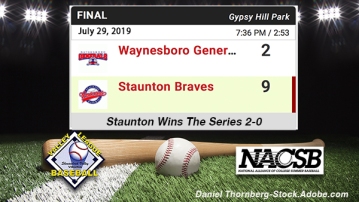 and an error… and four walks. Andrew Czech was in the middle of it, of course, walking in his first at-bat of the inning, and knocking in two runs with a single in his second.

Jacob Selden, Ryan McCarty, Casey Haire, and Eli Davis (and Czech) all had multiple hits in the game, and Cameron Nolet started and threw six solid innings to receive the win. Tyler Dunn and Tanner James finished things off with a combined three shutout relief innings.

The Generals, who finished up an amazing overall season, got three hits from Carson Klepzig, and two from Jackson Tate in he losing effort.

The Braves will now await the winner of the Charlottesville-Covington game this evening.

The Covington Lumberjacks went crazy at the plate last night, knocking 20 hits in 40 at-bats, along with six walks, to batter the Tom Sox to tie their series at a game apiece.

Every single Lumberjack starter had at least one hit, and seven of them had at least two (!!), while early replacement Jeff Taylor added three hits off the bench. The Jacks didn’t lead all game (the Sox were up 5-4 after the top of the fifth), but their relentless attack grabbed the lead in the sixth, and then added two runs in the seventh, and four more in the eighth.

Taylor and Jonathan Barditch each had three hits, and Pedro Nazario drove in three and scored one for the Jacks.

The Sox were led by Thomas Francisco (no surprise there) with three hits and three runs scored, and Trey McDyre, who had two hits, two runs, and an RBI.

Yordan Maldonado got the win for the Jacks with four innings of relief, and Sam Crawford got the loss for the Tom Sox.

The teams face off tonight in a winner-take-all game three in Charlottesville, game time 7 p.m. (I’ll be there!) 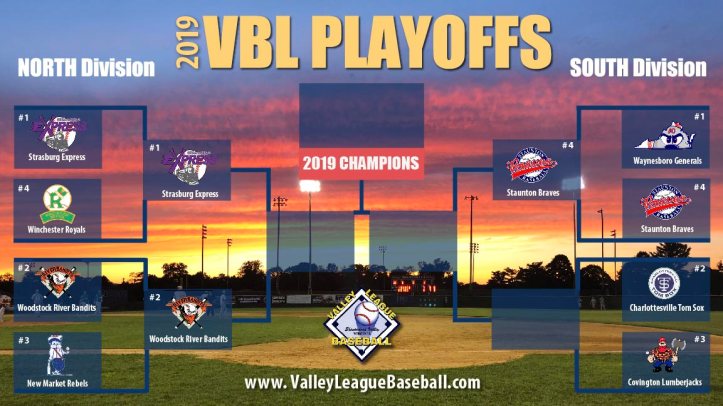 Remember, if you can’t attend the game of your choice, you can watch live on our Facebook page courtesy of Sheetz, “Run and Done,” and Subway, “Make it What You Want!”

See you in Charlottesville tonight… I’ll be wearing a black Valley League hat. Come by and say hello!