The rains came to Charlottesville last night- boy, did they ever- and it pushed game three between Covington and the Tom Sox back a day to tonight (7 p.m.). The game in Strasburg started late, but much to the Express’s chagrin, it started….

Well, we all knew they could hit, but when this River Bandit lineup gets rolling, it’s like that huge stone in Raiders of the Lost Ark, just smashing everything in its path.

Last night in Strasburg, the Bandits scored two in the first, and then four in each of the

second, third, and fourth innings, inundating the Express with 12 hits and 14 runs in just the first four frames. Things may have slowed after that, but the Bandits ended the gane with 20 hits, six walks, and 18 runs.

All that adds up to a first-game blowout.

The Express fought gamely, scoring seven runs in the middle innings, with five coming on two home runs- a three-run shot by Sonny Dicharia, and a two-run blast by Josiah Ortiz. But of course, when that huge stone gets rolling….

The Bandits are now one victory away from the franchise’s first ever appearance in the finals. The teams play tonight at Woodstock at 7 p.m. (weather permitting).

Remember, if you can’t attend the game of your choice, you can watch live on our Facebook page courtesy of Sheetz, “Run and Done,” and Subway, “Make it What You Want!” 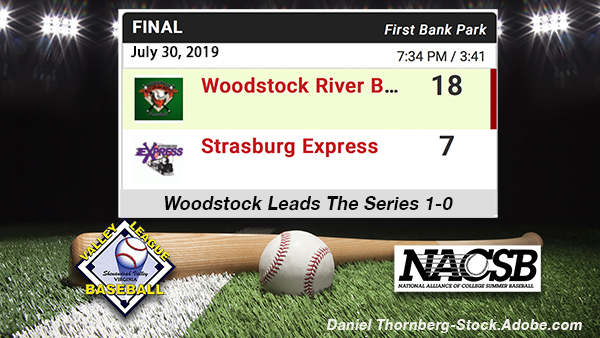