While some players travel far and wide to get to the Valley to play some summer ball, others get to stay home.

Our 16th best hitter of the 2019 Valley League season is one of the latter; Cayman Richardson grew up in Mechanicsville, Virginia, and is attending the University of Virginia. So playing for the Charlottesville Tom Sox must have felt somewhat familiar for the young man.

And did he ever hit:

Richardson finished the regular season tied for eighth in the league in batting average, tied for tenth in hits, and tied for third in runs scored. He was first team All-Valley in the outfield, and was ATVL’s hitter of the day twice- on June 2 and June 10.

On June 2nd, he went 4-5 at Staunton, with four runs, a triple, two RBIs, and a hit-by-pitch. He was also excellent just two days later at Winchester, also going 4-5, with another four runs, a double, three RBIs, a walk, and stolen base. He hit in 13 straight games between July 5 and July 21 as well. He had four hits twice, three hits seven times, and two six times.

The 6-foot-1 rising senior has received consistent playing time for the last two years at UVA:

Congratulations on your excellent summer! 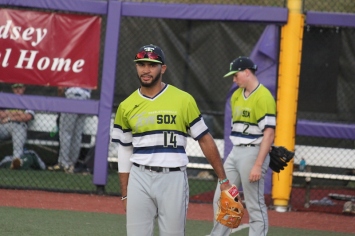