The 13th best hitter in the 2019 Valley League season, Strasburg first baseman Sonny DiChiara, is also one of the most decorated players on this list, as he had a dynamite freshman season at Samford and won several postseason awards.

Let’s start with his summer:

DiChiara was a consistant run producer in the middle of the Express lineup all season long. He finished tenth in slugging percentage, eighth in total bases (72), second in RBIs, tied for fifth in home runs, and tied for eighth in doubles. He had an 11 game hitting streak from June 14 to June 29, was an All-Star, and attended the Showcase for top prospects in Cary, North Carolina.

He was all Samford could ever want him to be as well. As a true freshman in 2019, he put up the following stats:

Numbers like these will grab some attention, and after the season, DiChiara was named  to the Baseball America Freshman All-America 2nd team, and Collegiate Baseball’s and the National Baseball Writer’s Association All-Freshman first teams. He was also named to the Southern Conference’s first team, All-Region, and the SoCon’s Freshman of the Year.

The summer of 2020 will most likely find this young man on the Cape, as he has a full offer already. Congratulations on your excellent summer! 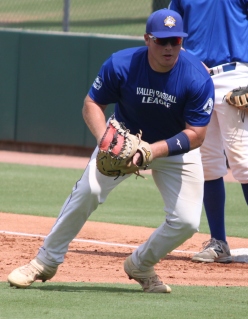