Here we are, finally at the top of the starter’s list! Before we start the discussion about this year, let’s take a look at the #1 starters over the last 10 years…

The only major leaguer on this list (so far) is Drew Rucinski, who has pitched in 9 games at the major league level over three different seasons.

This year? The top starter in the 2017 Valley League season is Strasburg’s Zach Peek, from Winthrop!

Here are Zach’s numbers in both the regular season and his one start in the playoffs (which he returned for, by the way. Zach had left the Express earlier, but returned because the team desperately needed another arm.)

Among the pitchers considered for this list, Zach finished 2nd in ERA, 3rd in strikeouts, tied for 1st in batting average against, 1st in WHIP, 2nd in K/9, and 2nd in BB/9. Zach was named first team All-Valley at starting pitcher, and the two outlets, Baseball America and Perfect Game, noticed his electric arm. BA named him the top prospect in the league, while PG named him #2.

Zach’s best start was June 12th against Covington, when he threw 6 shutout innings while allowing only 2 hits, 0 walks, and struck out 6. His game score, 74, tied for the 5th best in the entire season.

The current sophomore put up the following numbers in his first season pitching in college, after which he was selected as Freshman of the Year by Perfect Game USA:

I think it’s safe to say that great things are expected of Zach and his right arm. He surpassed (or equalled?) expectations in the Valley League in 2017, and has a bright future!

Congratulations on your excellent summer, Zach! 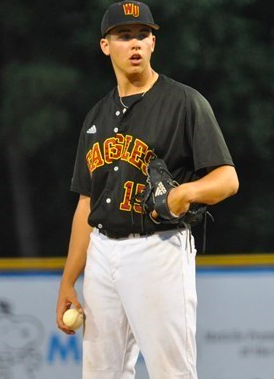